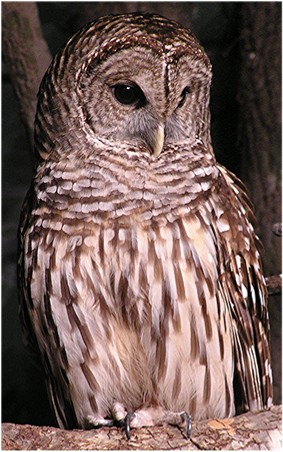 Diet: The diet of Barred Owls consists mostly of mice…

OWL DREAMS OF HIS DINNER

Perhaps if they were simmered in a broth,
Or cooked with leeks and mushrooms in a stew,
But swallowed whole and raw? Must I, though loath,
Consume my food in manner so undue?

The fault is not the mouse, with all respect,
The mouse is the most excellent of prey,
But the mode of preparation should reflect
The qualities that are an owl\'s, per se.

For Nature, after critical review
Of all She\'d done in all the world\'s domains,
Accomplished absolute perfection through
This melding of attractiveness and brains.

Our wisdom is so well acknowledged that
To speak of owls as wise is a cliché.
Our senses match the eagle and the bat.
Our looks exceed them both far and away.

And yet I dine with less bon appétit
Than a common cat, whose palate is so far
Indifferent to the taste of uncooked meat,
He thinks it fine to feed on Mouse Tartare.
Or worse, a brute reptilian crocodile,
Some swamp-bred rodent squirming in his grasp,
He gulps and slops it down Sashimi Style-
Is that appealing? Really…, need I ask?

Though I fare little better, which is why
It\'s all the World\'s great pity and a waste,
That faced with such a paltry diet, I
Should be a bird of such discerning taste.

What tragedy to never more than dream
Of mice prepared with elegance and class:
satuéed with truffles, smothered in rich cream,
Glazed with buttered brandy-under glass.

Though, times I\'m almost willing to allow
My appetite might supersede my pride,
And condescend to some more humble chow:
Like ground and grilled, or even chicken-fried.

It\'s nothing more than madness to pursue
Such visions my imagination brings.
By nature there are things I cannot do,
As perfection does not mean to be all things.

I can\'t manage in the kitchen, so to speak.
Why, what would be a more preposterous thing
Than trying to hold a saucepan in my beak
While stirring the ingredients with my wing.

And so, you see, that lacking certain parts,
Required for preparing a repast,
The practice of the culinary arts
Lies beyond an owl\'s non-dexterous grasp.

But then, was I created incomplete?
To muddle through with beak and wing and claw,
Without the means for cooking what I eat:
To not have hands might seem a crucial flaw.

And true, from what I\'ve seen in this locale,
Those hatchet men who trespass on my lands,
Do fancy they\'re more perfect than an owl.
But where\'s perfection in a pair of hands?

For based on observation, so it seems,
They\'re high-and-mighty hooligans and fools,
Who chop down trees and foul the lakes and streams.
Those hands, indeed, the very Devil\'s tools.

I\'d want a great long spoon ere I should sup
With them that think they\'re better made than me,
Not that I would wish to seem stuck-up,
But who could digest such brash effrontery?

I\'d see them tumble into Hell\'s black maw,
And stew till Kingdom Come in their own juice.
But then I toss a mouse down, extra raw,
And think: Some might be put to worthwhile use.

For whatever their capacity allows
To lie within their limited purview,
The proper way of serving up the mouse
Is something that one might be trained to do.

It\'s not beyond the realm of rational thought,
That with patience and the will to see it through,
A meager human being could be taught
The way to cook for me.

Who cooks for you?