All written material on this site is ©Rick Fine. Anyone interested in using material from the kids' section for performance can use the Contact page to get permission. There is no charge, but I like to keep track of where things are going and what's being done with them. 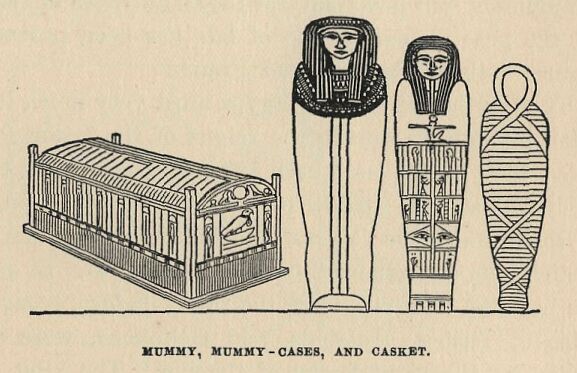 Because the number of players is adjustable all other Mummies are indicated as _______MUMMY, when the dash is preceded by an asterisk (*) it means that the line is continued from the preceding.

A NIGHT WITH THE MUMMIES

SCENE: Some museum somewhere, the Hall Of Mummies. Fourteen MUMMIES are standing against a backdrop. A sign above them reads Hall of Mummies.

The LIGHTS DIM indicating that the museum is closing. A CHIME rings off stage.
The MUMMIES all step forward, arms stiff in front of them. They come together at center stage and sit in a semi-circle facing the audience.

FIRST MUMMY: [takes off one of his hands and uses it as a gavel] Order! Order! I hereby proclaim the one-hundred, twenty thousand and eighteenth meeting of the Mystic Order of Mummies in session!

FIRST MUMMY: Thank you. Now, is there any old business?

I know, I know, thousands of years worth. As usual we\'ll skip over that for now. What about new business?

_________ MUMMY: And I\'m sure you\'ve all noticed the way people act when they come in and see us. Scared to death. Like we\'re some kind of monsters from beyond.

*________ MUMMY: The Curse Of the Mummies - that people will believe anything they hear about us. It\'s been that way for…

FIRST MUMMY: Wait, don\'t tell me. Is it thousands of years?

_________ MUMMY: We don\'t. I mean, look, I used to be a gardener at the Pharaoh\'s palace. All I ever wanted to do was grow flowers to make people happy. Why would I want to scare anybody?

_________ MUMMY: That\'s a good point. You know, I was a painter. I decorated walls and monuments and statues, making them beautiful with bright colors and nice designs.

_________ MUMMY: And I was a sculptor. I carved the monuments and statues that you painted so nicely. We all got along so well, remember? Nothing scary about that.

_________ MUMMY: And me, I was an architect. I designed homes and temples and palaces. People admired my work, and that made me feel good. I don\'t think they would have liked it if I scared them.

SECRETARY MUMMY: I was a scribe. I wrote down histories and stories about gods and heros. And maybe there were some scary bits here and there, but they were meant to inspire people, not frighten them.

PRIESTESS MUMMY: I was a priestess, and people came to me because they knew I cared about them and would do everything I could to help them. I wanted them to feel good, not afraid.

_________ MUMMY: Well, as you all know, I was one of the Pharaoh\'s overseers. And if I ever had to scare anybody it was for their own good, but I never scared anybody just for the sake of of scaring them. That wouldn\'t have been right.

OTHER MUMMIES: Thousands of years?

*________ MUMMY: Well, so maybe we are a little scary. I can understand that. We don\'t exactly look our best, all tattered and moldy. The thing is, we don\'t do anything except scare people. Can\'t we do something else?

FIRST MUMMY: Be patient, I know we\'ve been waiting been a long time…

OTHER MUMMIES: Thousands of years.

FIRST MUMMY: Right, but you have to remember, being a Mummy is forever, and someday when the Pharaoh needs us he\'ll call us all back. You\'ll see.

FIRST MUMMY: All right, all right, but complaining won\'t do any good. Now, what is it we do when we\'re feeling down?

FIRST MUMMY: What else?

FIRST MUMMY: Is that all?

FIRST MUMMY: Good! Now let\'s all get in place.

The Mummies stand up and begin moving to the back of the stage to form a chorus.

One of the Mummies stops and looks out above the audience.

Another Mummy turns and looks.

_________ MUMMY: And there! do you see? Hundreds, no thousands of Mummies. They\'re all coming down along the river. Coming back from all over the world. What a happy, glorious day!

Mummies !
How we love it, how we love it
That we\'re all Mummies
Someday we hope to be
Back with the folks in
E - G - Y - P - T That\'s where our Pharaoh\'s
Waiting at the riverside to
Greet his old Mummies
The crocodiles will wave and they\'ll smile
As we come marching down the Nile.

Two of the Mummies [BADRU, a boy and KHEPRI, a girl] step out of the chorus to center stage. Perhaps they dance.

BADRU: Hey, Khepri, Do you know why Mummies never go on vacation?

KHEPRI: No, Badru, why is that?

KHEPRI: That\'s a good one, Badru. Now, do you know who gave the Pharaoh his baths when he was little?

BADRU: Hemmm, would that have been his … Mummy?

SECOND PART OF THE MUMMY SONG

While the mummy chorus sings, Badru and Khepri do a dance by striking silhouette poses characteristic of ancient Egyptian wall paintings.